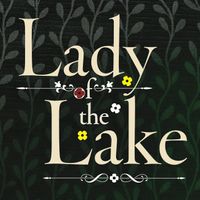 From the recording Lady of the Lake (Winter's Eve)

The Wandering Aengus (music by Lisa Lawson, words by William Butler Yeats) -- Yeats' poem "The Song of the Wandering Aengus" speaks to me of a mystical, whimsical love, forever sought after. Although many settings of this song are slow and sad, I see it as delightful and fun, something worth seeking!
© 2013 Lisa Lawson

I went out to the hazel wood,
Because a fire was in my head,
And cut and peeled a hazel wand,
And hooked a berry to a thread;
And when white moths were on the wing,
And moth-like stars were flickering out,
I dropped the berry in a stream
And caught a little silver trout.

Though I am old with wandering
Through hollow lands and hilly lands,
I will find out where she has gone,
And kiss her lips and take her hands;
And walk among long dappled grass,
And pluck till time and times are done,
The silver apples of the moon,
The golden apples of the sun.